In 2001, Phoenix Feline Fanciers mourned the loss of two of their founding members, Craig Rothermel and Becky Cotter.

These trophies are on display at our annual show each December. The name of the winning cat and its owner is inscribed on the trophy each year. A small permanent award is presented to the winners.

The Craig Rothermel Memorial Trophy, established in 2001, memorializes the contributions to the Phoenix Feline Fanciers, and CFA, by Craig Rothermel.

Shortly after Craig and his wife, Diana, moved to Arizona from Pennsylvania, a group of local cat fanciers approached them asking for help to start a new CFA cat club because there were so few clubs in the area. They were persuaded to join this group, and form a club that was comprised mainly of people who were not already members of existing area clubs. This club was accepted into membership in CFA in February, 1993 as Phoenix Feline Fanciers, Inc.

Since its founding, the members of Phoenix Feline Fanciers often turned to Craig for advice and inspiration as they sought to establish and improve the cat fancy in Arizona. Craig's knowledge, wisdom, and sense of humor helped set the tone for a club of hard-working members striving to host high quality, fun shows.

Craig, a past member of the CFA board of directors and former President of CFA, involved himself in the legislative issues that confront the cat fancy every day. His advice was invaluable when facing animal rights activists. Craig's persuasiveness and speaking ability sounded the cat breeder's message clearly.

Craig, a former breeder of Persians, began judging for CFA in 1977. He and Diana traveled worldwide to judge at CFA cat shows, and often guest judged at shows in other organizations.

Craig is missed by all, especially by the members of Phoenix Feline Fanciers.

Winners of the Craig Rothermel Memorial Trophy for highest scoring cat in Championship at the annual Phoenix Feline Fanciers cat show are:

The Becky Cotter Memorial Trophy, established in 2001, memorializes the contributions to the Phoenix Feline Fanciers, and CFA, by Becky Cotter.

A charter member of Phoenix Feline Fanciers, Becky was a very successful Manx breeder and also an active exhibitor in the CFA Southwest Region, and throughout all of CFA's regions.

Becky is best remembered for GC, GP, NW Cottori Juliet, a stunning white Manx spay that became CFA's Best Cat in Premiership in 1997. Becky also served as the CFA Manx Breed Council Secretary from 1999 until 2000. She was always a gracious exhibitor and willing mentor. Her contributions to the cat fancy, and to the Manx breed, cannot be measured.

Becky was known for her "presence" -- that shone most brightly when she was enjoying a cat show with her friends.

Winners of the Becky Cotter Memorial Trophy for highest scoring cat in Premiership at the annual Phoenix Feline Fanciers cat show are: 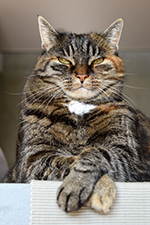 Winners of the President's Award Trophy

Some of Our Favorite Links

Thanks to Kathryn Brady of CAT SHOWS US!! for show documents design!

Thanks to Danny Sprouse the 'Creative Cybergeek' for website design & development!